Happy holidays – scammers want to take advantage of your generosity

“According to the Federal Trade Commission, consumers reported losing $1.6 billion to charity fraud so far this year. The median amount lost is around $1,000.”

“A Maryland woman said someone knocked on her door seeking money for boxes to send to disabled veterans suffering from PTSD. He had a business card and a story, so she gave him $40.”

After the fact, the woman found the real campaign online. It ended in 2018.

Her generous gift was gone to the pocket of a scammer.

Check before You Donate

The key to avoiding charity fakes is to check if the group is recognized by the IRS as a nonprofit or charity. CharityCheck101.org helps you do that for free with its Directory Search and Reverse Lookup pages. Get the organization’s EIN and then dig deeper.

Fakes can be non-existent “charities” and can also be groups that spend little or nothing on their purported mission. It’s easy to check spending by reviewing the group’s public IRS Form 990. Find a 990 super fast and free.

We created CharityCheck101.org so you can quickly check both charity identity and tax status

Avoid Fakes. Not every group that looks, sounds or feels like a charity is truly a charity. Fake “charities” often adopt names similar to legitimate charities, siphoning off dollars needed for good works. They’re specially active around crises, natural disasters and other big news items and causes. Do a charity check to make sure the group is truly a charity.

Confirm Identity. There are more than 1.7 million organizations recognized as tax-exempt by the IRS. Their names are often similar. Similar names easily produce confusion. More than 17,000 organizations have “Veteran” in their names. More than 1,300 have “Habitat for Humanity.” More than 80 have “American Cancer.” Do a charity check to make sure you are supporting exactly the group you think.

Confirm Tax Status. Do a charity check to find the organization’s tax status. Before you give, you should know the answers to these two questions – 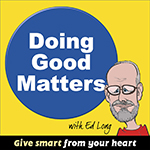